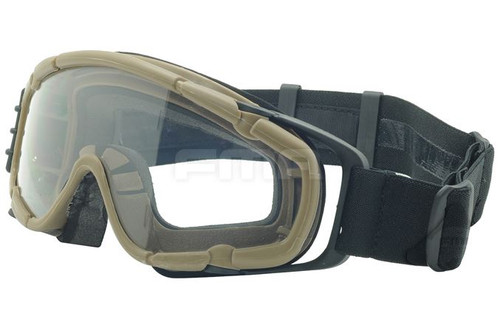 THE SCIENCE BEHIND FOGGING

I think of all the questions I’m asked about my little niche in the tactical world, the subject that crops up most frequently is fogging. Fogging, misting, clouding of eye pro. We’ve all suffered it to some degree, and particularly in the balmy temperatures that Great Britain is currently enjoying, it seems relevant to talk a little about it.

As long as we have been looking through clear materials, we have been getting fogging to some degree. So lets look closer at the “what" & “why" and "how the hell…”.

The primary mechanism for fogging is the deposition of water vapour onto a nice welcoming surface. For most of us, the source of water vapour is the body’s own cooling mechanism; sweat. We sweat in order to cool ourselves, because when water (or sweat) turns from a liquid to a vapour, it takes energy (in this case heat) to cause this to happen. So as the sweat evaporates, it uses heat from our exertions to do so. Net result; less heating, but a constant source of water vapour. And this water vapour loves to land on our eye protection.

Airflow helps. A cooling breeze will move the air sufficiently to retard it’s tendency to settle on lenses. Conversely a poor airflow around your eye pro (think helmets & hats, which also raise the local temperature) will generally cause us to fog more easily. In fairness, I can sweat like a nun in a cucumber field, so bear in mind your own level of perspiration.

But it’s not just about how sweaty we get. Think back and I’m sure you’ll come across conditions where misting was troubling despite a lack of exertion. I can recall a boat insertion late one October night, where despite doing nothing more than sit on my backside for thirty minutes, I was plagued by fogging of my eye protection and also my night vision. Repeated application of a good anti fog product had little to no effect whatsoever. On the other hand, I have spent a day running in and out of buildings, on the hottest day of the year, while fully kitted out without particular issue. But why was this? The answer lies in the variables that we are routinely exposed to. At this time, the night was still and unseasonably warm, so there was a high level of humidity. The air was full of more water vapour than usual, so it was readily dropping it onto any handy surface. Wind was absent, so airflow was negligible, it was a typically still night when meteorological fog develops. But this isn’t purely about humidity, but the dew point as well. Dew point is the temperature at which air becomes saturated with water vapour. Put simply, if the temperature falls below this point, the air will deposit water as liquid onto surfaces, usually because the surfaces are cooler than the dew point.

So, all of this rambling meteorological explanation is really to illustrate how difficult it is to answer the question “will my eye pro be fog-proof?” Bluntly, the answer is “no”. In my opinion, there is no such thing as fog proof. Let me elaborate.

Many brands of eye protection have a proprietary coating that is described as anti fog. In my experience these vary widely in how effective they are, but in fairness, they will have often been tested when atmospheric and personal conditions also varied; hardly a controlled trial. They do, however have two things in common; they will all sooner or later become overloaded by fogging, and eventually they will become damaged and stop working. A similar judgement can be levelled at anti fog cloths and lens treatments. The cloths are perhaps the simplest method of fog retardation; they are used to keep the lens surface clean. Often overlooked, the simple point is that a clean lens is less likely to fog. Microscopic particles of dust on the otherwise smooth lens surface will allow the water vapour a point at which it can coalesce.

Anti fog treatments are in my opinion the best weapon against fogging; they are reasonably effective when applied according to the instructions (read ‘em, folks as they do vary), can be reapplied easily in the field when losing effectiveness, and aren’t damaging to the lens. This last point is important. Invariably, ballistic lenses are made of either polycarbonate or trivex, both ductile optical materials. In the underlying event of an impact, they flex to absorb impact energy. Exposure to the wrong chemicals will cause the material to become significantly more brittle, which will of course risk the lens cracking or shattering under impact. An example of this was a popular rain repellent coating for car windscreens, which carried a warning on the bottle not to apply to motorbike helmet visors, as it would cause just this to happen. Ensure that the treatment is designed for the lens concerned.

Of course, the design of eye protection is going to have a significant effect; eye shields fog less readily than goggles, but I haven’t come across a particular brand or design that is a stand-out. The closest effort has to be the fan goggle. Fielded by more than one manufacturer, the goggle features forced airflow in the form of a small fan. They can be surprisingly effective, but eventually will still be overloaded in my experience. Even fan goggles need anti fog treatment in the end.

So, there’s no straight answer other than “there is no such thing as fog proof”. My advice; try several different types of eye protection until you settle on what works for you. Keep your lenses clean and free of scratches. This means don’t wipe them down on the hem of your shirt. Use a decent microfibre spec cloth, and an anti fog preparation. Carry the cloth and anti fog with you; mine lives in the left small thigh pocket in my combat trousers. And use them often, and as instructed. I’ve seen folk complain that the chemical doesn’t stop fogging after I watched them apply it and furiously buff it all off. These things work by leaving a thin layer on the lens.

This product hasn't received any reviews yet. Be the first to review this product!